7 Famous Temples in Delhi that Make Your Wishes Come True 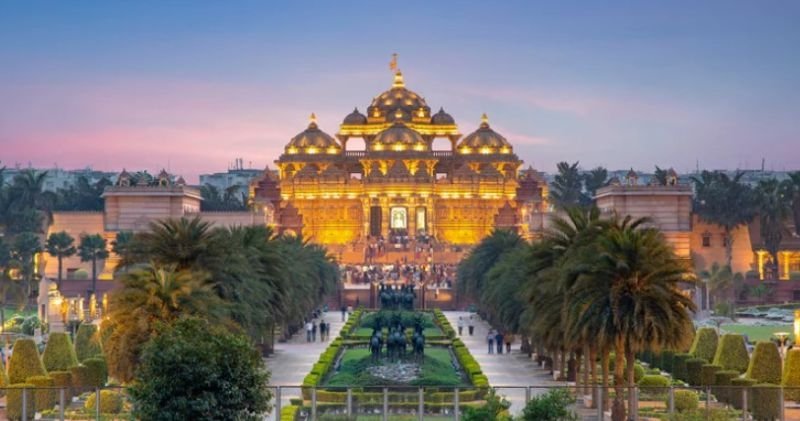 Built-in 2005, Akshardham temple is one of the most artistic creations in the 21st century. It was awarded the title of World's Largest Comprehensive temple by Guinness World Record. The sprawling lawn of the temple is spread over 100 acres. The temple covers an area of 86,342 square feet.

The devotees are welcome with the arena of 10 gates which symbolizes the 10 directions. The devotees are aw struck by the sight of 869 peacocks carved in the fascinating peacock gate, symbolizing peace and purity. It is profusely carved with 234 ornate pillars, more than 20,000 statues, sculptured Indian flora & fauna.

It is surrounded by peaceful Narayan Sarovar which carries holy water of 151 sacred rivers lakes and pilgrim places of India.

The musical fountain in the Yagnapurush Kund displays the changing cycle of life form creation, sustenance to destruction and unchanging energy of the divine.

Lotus Temple is famous for tourist temple in delhi which is located in the Kalkaji area, in South Delhi, it gets its name from the shape inspired by a lotus flower. The lotus represents the manifestation of God is also similar to purity and tenderness.

The temple is made up of marbles, cement, and dolomite. The 27 freestanding petals arranged in a cluster of three. 9 such clusters are serving as the entrance to the building. Lotus temple has 9 Ponds and 26 acres of green lawn around it serving as the green leaf for the floating lotus.

It can hold 2500 people inside it. No musical instrument is allowed in the temple but once you can sing and pray. It is one of the best examples of heavenly aboard of pure devotion and eternal peace.

It is believed to be existent during Mahabharata, however major parts of the shrine date to 1764 A.D. It is also believed that the Pandavs and Kauravs worshipped the shrine. Kedarnath, a treasurer of Mughal Emperor Akbar renovated the temple. It was later refurbished in the 20th century.

The temples have 8 sides and are made up of Black marble and pumice stones. It is open throughout the year for its devotees. Huge celebrations during both the Navratri can be seen. A large fair is organized and a huge increase of devotees can be experienced.

Majorly devotees come for mundan in kalkaji mandir and also known for the Mundan (Bal Utarna) ceremony. No discrimination is made based on gender and hair of girl child and boy child is offered.

Best time to visit kalkaji temple is Navratri. And, if you're planning to visit for tourist purpose then winter season (Oct-Mar) is the best time. You can also enjoy the Kalkaji Mandir live darshan which is forcast by Shri Kalka Ji Mandir Sudhar Committee. Here is the website for Kalkaji devi live darshan: http://www.skmpsc.org/

The Chattarpur temple is also known as the Shree Adya Katyayani Shaktipeeth Mandir, built-in 1974, is one of the largest temples in Delhi with glorious history. The temple is dedicated to Goddess Katyayani. The exquisite architecture of the temple is marked by the fabulous use of marbles and carved jaalis. It spreads over 70 acres of land and the temple features separate areas to each deity divided into three complexes.

The history of the Chattarpur temple blends as the birth of Katyayani who is the sixth form of incarnation of Maa Durga. It is believed that Maa Durga was born to sage Katyayan who worshipped to be granted the blessing of being her father.

The entrance of the Temple has a holy Kalpvriksha tree (Baobab tree/ Adansonia digitata). It is believed that tying a sacred thread or bangle on the tree fulfills your wish.

There is a captivating Shrine of deities like Goddess Katyayani, Laxmi- Ganesh, Shiv-Parvati and Lord Hanuman. Also, Chattarpur Temple is one of the wish fulfilling temples in delhi where lots of people come with their wishes.

The shrine of Goddess Katyayani is open only during the Navratri festival, twice a year. The temple also has a huge basement room where devotees are fed meals from the Temple Kitchen.

The Main occasion to visit the temple is Navratri, Janmashtami, and Mahashivratri.

The 108 feet Hanuman Mandir is also known as Sankat Mochan Dham. It is a wonderful art of engineering, art, and technology.

Tuesday and Saturday are the most auspicious days in the temple as a large number of devotees can be seen for the aarti. During the aarti, the 108 feet statue hand across the chest moves back, revealing a mesmerizing lord Ram and Sita in the heart of Hanuman as described in Ramayana.

The Laxminarayan temple is located in the west of Connaught Place in Delhi. The temple was constructed by Raja Baldev Das in the year 1938 and has been dedicated to Lord Vishnu and Goddess Laxmi. The temple is also known as the Birla temple/Mandir of Delhi. It was inaugurated by Mahatma Gandhi in 1939.

The color of the temple is semi Red and Cream that depicts devotion and love towards Gods and goddesses.

The Geeta Bhavan, a hall dedicated to Lord Krishna is adorned with beautiful paintings depicting scenes from Indian mythology. There is also a temple dedicated to Lord Buddha with fresco paintings describing his life and work. There is an artificial mountain with a waterfall outside the complex surrounding the temple, which makes it on the Unique temple in Delhi.

The temple depicts all the doctrine of Hinduism and contemplates many beliefs of Hindu Culture and is famous for its Janmashtami celebration.

Located in the East of Kailash New Delhi, Iskcon temple was built in 1998 with beautiful architecture and was inaugurated by the Prime minister of India. Shree Atal Bihari Vajpayee Ji.

It is believed that 5000 years ago, Lord Krishna showed his metaphysical ability here.

The Iskcon Temple Delhi contemplates the heavenly world. The figures are richly adorned with gardens and jewelry, which have been assembled with great care.

Located at the Hari Hills in the East of Kailash, it is one of the largest complexes in India. It holds an Astounding Bhagavad Gita, which is the largest printed book of the major text of any religion in the world. It weighs 800 KG and is over 28 meters.

It is a glory of Indian Culture and a popular destination to learn major Hindu texts. It also has a Vedic Library and Museum. The Vedic museum and robot shows show Vedic philosophical and cultural heritage.

One can visualize a grand celebration at the Janmashtami festival on the premises.

The temples in Delhi are not only one of the most artistic creations but also have a long spiritual history within it. It makes the capital of India an apotheosis of temples. Each temple has a divine connection and ambiance attached to it with aesthetic values. It promotes one of the oldest religions on the earth and is a perfect example of the Fusion of Dravida and Nagra styles of temples in India.

Q1: Which is the oldest temple in Delhi?

Kalka Ji temple is one of the oldest Hindu temples in Delhi and India, built-in 1764 A.D.

Q2: Which is the most famous temple in Delhi?

Q3: Who built the Akshardham Temple?

The temple was built in 5 years by Bochasanwasi Shri Akshar Purushottam Swaminarayan Sanstha (BAPS) in 2005.
Written by